In 1986, an Icelandic youngster disappears when on vacation in Europe. Last news of him come from southern Spain, where he claims to make a living painting pictures on the sidewalks. When he fails to write home for several months his sister and mother catch a plain down south to try to find him. When they arrive in Andalusia they experience a sickening fear of what their search may reveal …

In this unusual on the road story the reader is led through the post Franco era of southern Spain and Morocco, into the exotic and dangerous world of street artists and tramps. The narrative is exciting and adventurous, full of darkness and subtle humor just as Leifsson’s previous works.

“Thorarinn is a raconteur, an entertaining stylist; effortlessly he paints snappy pictures that shine radiant and clear … The reader heaves a sigh of relief as, in the middle of the book, he is offered hope that this simple reveller will be found by his mother and sister, but the story has us in no doubt that dangers lurk round every corner for the innocent abroad.”  Pall Baldvin Baldvinsson / Frettatiminn weekly * * *

* (four stars out of five) “To put it shortly, Leifsson succeeds in plunging the reader deep into the plot so that this alien existence (to us middle-class people at any rate) springs to life in our minds. … One of the main strengths of the story is that I think many will find it easy to see reflections of themselves in this 19-year-old guy who longs to experience the big wide world whatever the dangers that lurk out there. … Leifsson is an excellent stylist, subtly amusing and fluent at creating an atmosphere.”                                                     Arnar Eggert Thoroddsen / Morgunbladid daily

“Leifsson is an entertaining stylist who is well versed in figurative writing … The Street Painter is a quick read, both because it is so entertaining that it keeps you reading and also because of the structure of the book, a fast narrative consisting of around 40 short chapters, each illustrated with a drawing which further adds to its impact. It reminds me in that respect of my favourite book The Good Soldier. But the essence of the story itself brings to mind Salinger’s masterpiece The Catcher in the Rye – the bible of that literary genre which deals with young people’s rebellion against their situations. That must count as praise – and that category of reader will surely be the one to especially appreciate The Street Painter, although the conditions of 1981 might seem peculiar to them: no mobile phones or credit cards – only postcards and bank giros.”                           Jakob Bjarnar, journalist

“Here is a picture of a world that is certainly intriguing. The world of wandering adolescents and down-and-outs in Europe around the middle of the eighties. This is a world not many know about today.” Bjorn Thor Vilhjalmsson / Vidsja, National Broadcasting Service “The Street Painter is an excellent, well-written book. A cleverly woven thread around a world hidden to most people – many see mirages while the writer shows it as it is … A terrific story …”                                                      Kolbeinn Ottarsson Proppé / Frettabladid daily

* * * *1/2 (four and a half stars out of five) “This is an outstanding and frank story of travel and coming-of-age, a story young people should perhaps avoid – if they don’t want to be tempted.” Jón Bjarki / DV daily “This is a really outstanding book, well written, funny, exciting and interesting.”      Gudridur Haraldsdottir / Vikan

* * * * (four stars out of five) “Leifsson is a great humorist with an excellent command of style, language and narrative progress. … Each chapter has its signature drawing illustrating an incident taken from the chapter, complementing the mood perfectly. The drawings form a kind of collection of icons illuminating the ‘path of suffering’ undertaken by this young Icelandic punk”                                     Eirikur Stephensen / Eyjan

“The story is in a kind of diary format, where Leifsson’s writing inherits a variety of narrative traditions: the travel book, the road book or the my-life-on-the-edge-of-society book, much like those that followed in the wake of George Orwell’s Down and Out in Paris and London. “He introduces the reader into a world to which only very few have access, though it is visible to all. The fact is that the world of the vagrant is so tied up with this contradiction – everyone can see it and yet few notice it or have contact with it. The Spanish cities where Leifsson roams are great tourist centres such as Seville and Cadiz … yet they contain a great deal of poverty, which is of course even worse in Morocco. Poverty, however, is not really the topic, this is not a sociological or political appraisal of the problems suffered by vagrants in Andalucia, it is more a travel story; the narrator is a kind of tourist in the world of the street – and, like a tourist, he goes by the name of his country, the Icelander. It is, perhaps, precisely because he is a tourist – homeless by choice, a young wanderer seeking adventure – that the suffering and the misery that can accompany such a life is not the central point. “The book is much more a kind of picaresque novel depicting the various amusing and sometimes dangerous circumstances that happen to our hero. Entertaining pictures are drawn of the people he meets, of all manner of swindles and tricks to which he is subjected, and of the random decisions on where to go next. Always on the horizon is some promised land such as the Canary Islands, which then vanishes when a detour is taken – often on account of some misunderstanding, ignorance or misfortune happening to our wanderer. “Another thread in the book is the mother’s and sister’s search for their young nomad who has been out of touch for a long time. The description of their journey is no less amusing as they also take a number of unforeseen detours and seem just as subject to coincidences and chance as the narrator himself. “The book’s main merit is its narrative joy, as well as the fact that the narrator does not take himself too seriously. In travel/road books of this kind the narrator can sometimes be engaged in a deep search for himself, the meaning of life or some such thing, resulting in a tendency towards bombast.”       Gunnthorunn Gudmundsdottir, www.bokmenntir.is 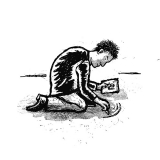 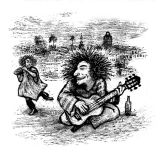 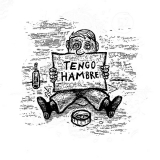 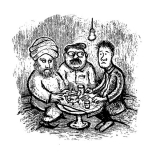 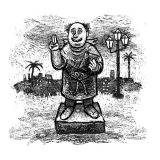 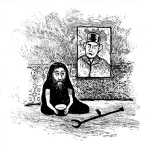 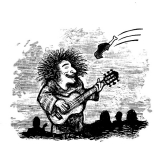 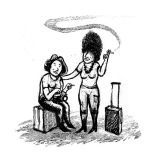 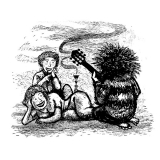